Actually...Yes, Please Take Us Back To The 70s

"Corbyn wants to take us back to the 70s of strikes and rubbish piled in the streets", has been one the hysterical cries from the bullying Sun and other gutter press who seem intent on trying to discredit this principled and dignified man.

But if the 70s mean a return to General Improvement Areas and the help given to people living in neighbourhoods to improve their homes and environments then let’s go back four decades.

The local paper for the town I was brought up in, The Lancashire Evening Telegraph, unearthed this last week. It really is worth sitting and watching for 20 minutes or so.

I had no idea that the 'homezone' and 'play street' street concepts that urban designers (including ourselves) rightly drool over (we were behind the UK’s first new build Homezone at our Staiths project were part of town planning in the 70s. Watching that film espousing street play and street greening, traffic calming, pedestrian supremacy over the car and the value of open space made me realise even more the failure of my generation to do what we are supposed to do and make the world a better place for the generations that follow us. When the section about General Improvement Areas came on whereby councils paid 95% of your costs to bring your home up to standard in terms of damp proofing, re-roofing, electricity and plumbing upgrades I remembered how Gerardine and I were helped by this system in our early 20s. We felt so empowered and in charge of our futures. It gave us the confidence to push on with our business. It also was so much fun bringing this lovely old house back to life. 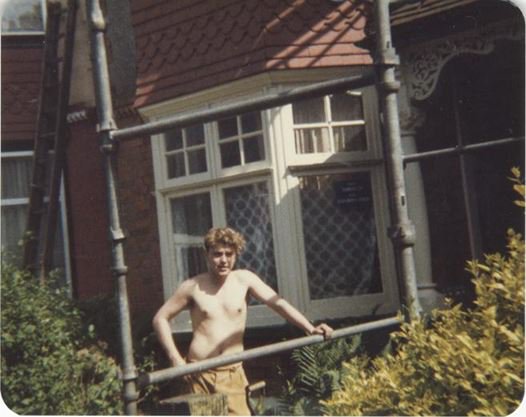 Wayne at the turn of the 80s outside first home

Today it’s not councils who can help young people to bring their “wreck” to a liveable condition but, for those lucky enough, help from mum and dad. Gerardine and I’s parents couldn’t have helped us and it was society that helped give us a leg up (in the same way that Blackburn Council means testing system paid for my education). Instead we have a government that is squeezing the living daylights out of councils to the point where the idea of trying to give a leg up to their poorer residents is something from the distant past. Councils are resigned to the fact that this element of their public service remit is about to become pushed further from their grasp in the upcoming CSR (Comprehensive Spending Review). Wouldn’t it be great if this government thought about the other CSR acronym, Corporate Social Responsibility and understood how social responsibility used to give a leg up to people from relatively poor backgrounds like Gerardine and I.